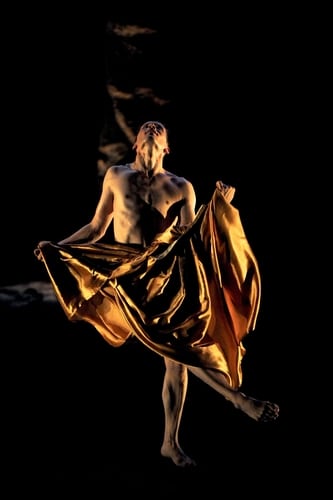 Carolyn Carlson’’s legendary solo Blue Lady (1983), has touched thousands of spectators around the world with it’s unforgettable images. It is a fascinating gallery of female portraits spanning the space of one life – a tribute to maternity and mysterious Venice. Today the solo is being handed on to Tero Saarinen, the charismatic Finnish choreographer and dancer. Blue Lady [Revisited] offers precious, radiant moments that touch the soul and remain imprinted on the heart. The premiere of this version received standing ovations in Lyon last autumn.

Carolyn Carlson is the Artistic Director of the National Choreographic Centre of Roubaix Nord-Pas de Calais. After her arrival in Paris in 1971, she became a key figure in the boom in contemporary French dance. An outstanding dancer and choreographer, she has directed ballet at the Teatro La Fenice in Venice and the Cullberg Ballet in Stockholm and been Resident Artist at the Finnish National Ballet and the City Helsinki Theater. In June 2006, the Venice Biennale awarded its first ever Golden Lion to a choreographer, Carolyn Carlson.

The performance is presented in collaboration with The Norwegian Opera & Ballet.