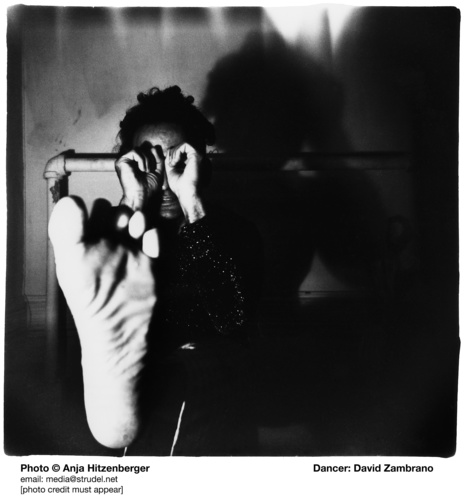 David Zambrano is making four duets with four different dance artists this year. He will spend a three weeks residency with each artist in four different cities through out this year: Amsterdam, Brussels, Vienna and Barcelona.  The idea is to have a pool of four duets that can be performed inside a very raw environment. A simple house lighting, an empty stage, music and dance.

Each duet, a maximum of 30 minutes. His question for this project, like most of his other dance projects, is how to make the stage being transformed by our bodies in connection with the music. How to become more eloquent with the transmission of information through our bodies? My quest is to become a better transmitter of life during performance.

David Zambrano
For over 20 years, David Zambrano has been a monumental figure in the international dance community, and his passion for cultural exchange continues to influence his work. Living and making work in Amsterdam and teaching/performing internationally, Zambrano is an ambassador and liaison across many borders, bringing together artists from all over the planet for his projects. An inspiring teacher, thrilling performer, and innovative choreographer, Zambrano has contributed generously to the field of dance in ways that have influenced many and impacted the dance world from several angles. His development of the Flying Low and Passing Through techniques are among his recent innovations that have helped to lead improvisational dance into an exciting future. Many of his projects have continuously influenced Zambrano’’s pedagogic methods, keeping them fresh and interesting for the students from around the globe.

Tickets: At the venue 1hr before the performance
No ticket reservations.

The performance have been created thanks to the artistic residencies of Impulstanz Festival (Austria), Danscentrumjette (Belgium), and La Caldera (Spain).

Supported by:
Arts Council Norway
Embassy of the Kingdom of the Netherlands