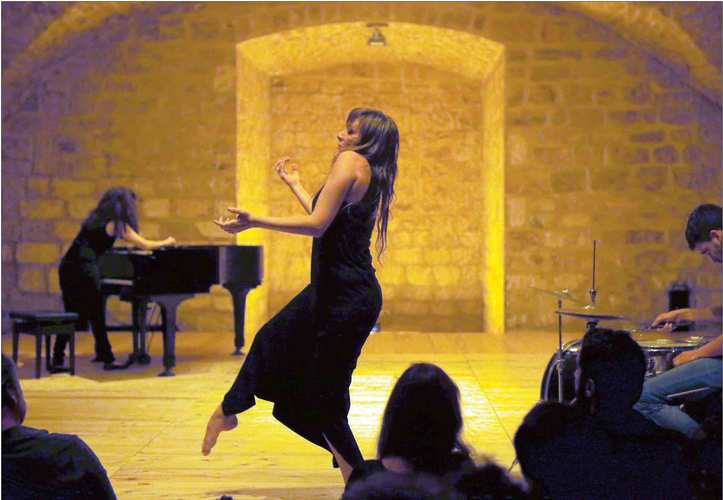 Room is a conversation between dancer Mia Habis, pianist Cynthia Zaven and drummer Øyvind Skarbø. The performance is an outcome of a 2 week creative residency in Beirut in 2014 presented at the Crypt of St. Joseph’s Church during the debut edition of CO2- Choreographers and Composers – the collaborative performance platform formed by BIPOD and IRTIJAL.

Since 2011 Habis has developed her work in creating “body installations”. She is a dancer, performance maker and dance teacher at Maqamat Dance House in Lebanon, directed by Omar Rajeh and since 2015, the artistic director of BIPOD- Beirut International Platform of Dance.

Cynthia Zaven is an artist based in Beirut. She has performed in various venues for contemporary and improvised music and has composed original scores and sound designs for film, theater, dance, and conceptual art projects.

Øyvind Skarbø is a Norwegian drummer, composer and producer. He studied with Terje Isungset, and also studies in Norwegian, Cuban and Yoruba traditional music. He has received several awards and stipends. Skarbø performs and records regularly with his own bands 1982 and Bly de Blyant.

The performance is produced by Maqamat Dance Theatre and CO2 Choreographers & Composers in partnership with the Norwegian Embassy in Beirut and Performing Arts Hub Norway.