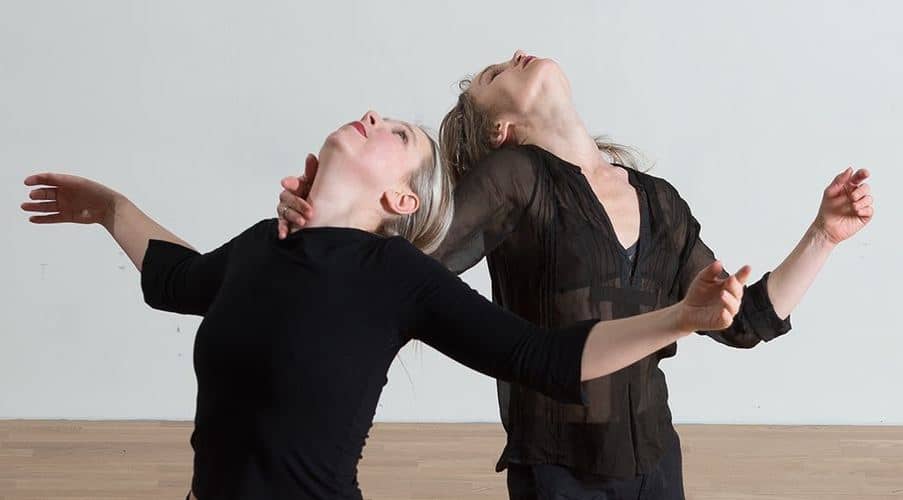 A hit with audiences, the work was shown 180 times and was seen by more than 25,000 people of all ages throughout Norway. Sisters 11 years later is the independent sequel.

Since the previous work, the sisters’ mother has passed away and their aunts are marked by age. 11 years later the sisters Liv Hanne and Anne Katrine are still dancing, and ask themselves and their five remaining aunts; how is life now? How has the meeting with death – through the loss of a mother and a sister – affected them? The wish to once again meet their colorful aunts on film, coupled with a desire to pull into focus death, aging and loss as a challenging but nonetheless natural part of life, drives the Haugen sisters to portray the next chapter about sisterhood and close relationships, inspired by their own family. The performance consists of film, installation-art, music, text and dance.

«The whole thing is so masterly done, and I don’t remember if I was breathing during the whole performance. I just remember that something took a firm grip of my heart and held me tight…» Helle Østvik, Finnmark Dagblad.

The performance premiered at Dansens Hus Norway, Friday 9 May 2014. It has also been performed in Tromsø, Hammerfest and Sandnes in Norway and Umeå in Sweden.

Co-production Dansens Hus Norway
The performance is part of the NB dance loop, the Nordic Baltic Touring Network is presented in collaboration with Bærum Kulturhus – Regional Center for Dance, and in connection with the National seminar with dance as a resource in the care of the elderly and dementia-sufferers – Dance for exuberance, meaning and health.

We at CODA wish to make contemporary dance accessible to the entire population. With our latest program category CODA+, we turn our focus on dance for, by and with the elderly. Explore all the exciting events under the CODA+ tab.