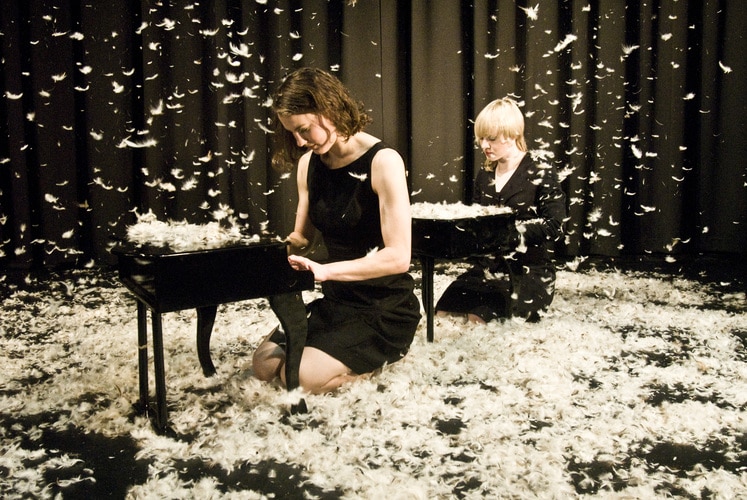 We Fiction & We Private

“One of Europe’s best kept secrets”

Panta Rei Danseteater (PRD) presents two new works in the two part performance WeFiction & Private Rite. One piece is made in collaboration with the Canadian choreographer Hélène Blackburn, the other by the company itself. PRD brings Nathaniel Reeds exciting music composition into both pieces which presents a physical and playful evening of dance. We takes the audience on a journey among toy pianos and lamps allowing for humorous moments to appear.

PRD will engage in a CODAyoung project alongside the performance. About 80 young adults from Stovner Videregående skole and dancers from The Planet will participate and create short choreographies in collaboration with the dancers in PRD. The result of the project will also be shown at Dansens Hus in the interval of PRD´s new production WeFiction & Private Rite.

Anne Holck Ekenes established PRD in 2000. The company has since enjoyed recognition for providing fresh, exciting and inspiring performance and teaching programs. From their base in Oslo Norway, the company devises new works for touring and develops educational programs to support the artistry. The company’s recent production Invisible Dances & Greener has been seen by more than 25 000 people in Norway, England and India.

Pia Holden has since 2005 danced with and collaborated on the running of PRD. She will collaborate choreographically in the production We.

Since 1983, Hélène Blackburn (CA) has made her daring choreographic voice heard in the contemporary dance world, both in Canada and abroad. She was trained in the Linda Rabin studios and at the Université du Québec à Montréal and has performed with the Foundation Jean-Pierre Perreault. Her dance, after 20 years of research, gives expression to a body of thought whose objective — in principle an outlook on human behavior — has been shaped by studies in ethnography and theatre and ultimately takes the form of a passion for the dancing body. “Chase the Glowing Hours with Flying Feet”, a piece she created for the Welsh company Diversions, based in Cardiff, was presented at the British Platform, where it was a major success.