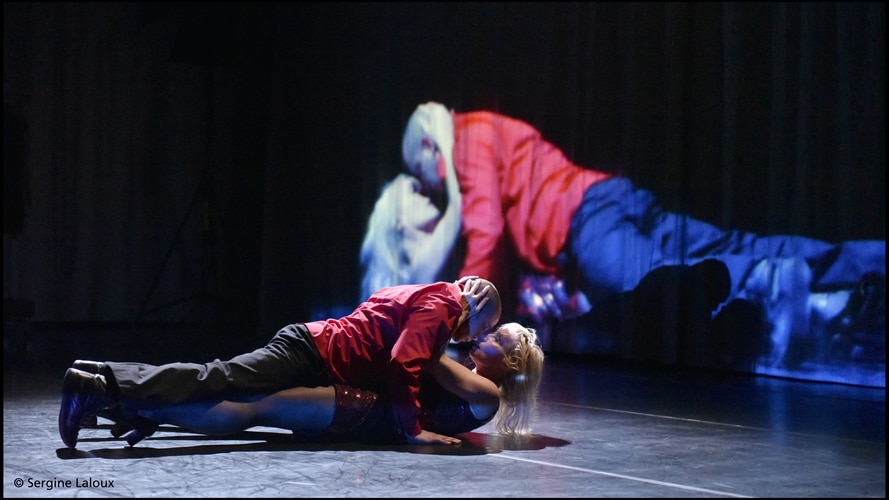 Dance meets theatre and film in this charged encounter between a woman and a man which takes the viewer on an inner journey.​

Belgian choreographer Michèle Noiret has worked with blending film and dance for a number of years. After the production After Hors-champ (2013), which was a turning point in her artistic practice towards what she calls dance-cinema, Radioscopies came as a commission due to the Belgian city of Mons being named European Capital of Culture in 2015. Film, dance and theatre are woven together into a fascinating an engrossing experience for the viewer. A strange man appears and we witness a womans journey to an inner world where fiction and reality are inseperable. A charged atmosphere where body and soul as opposites cease to exist. Who dreams what? Who wants whom? Who controlls what?

Michèle Noiret is a central Belgian choreographer and dancer who has been active with her own company since 1986. She met composer Karlheinz Stockhausen while studying at Maurice Béjarts Mudra School in 1976 and she worked professionally with him as a soloist over a period of 15 years.

Noiret has received several prestigious awards and recognitions for her work as choreographer. She has also made films and worked for a number of companies, theatres and festivals.

Created with and performed by Michèle Noiret, Isael Mata

Thanks to Carlo Chapelle, Stephan Dunkelman

The Compagnie Michèle Noiret is in residence at Théâtre Louis Aragon, scène conventionnée danse de Tremblay-en-France, within the context of  “Territoire(s) de la Danse 2015”, with the support of the Département de la Seine-Saint-Denis.