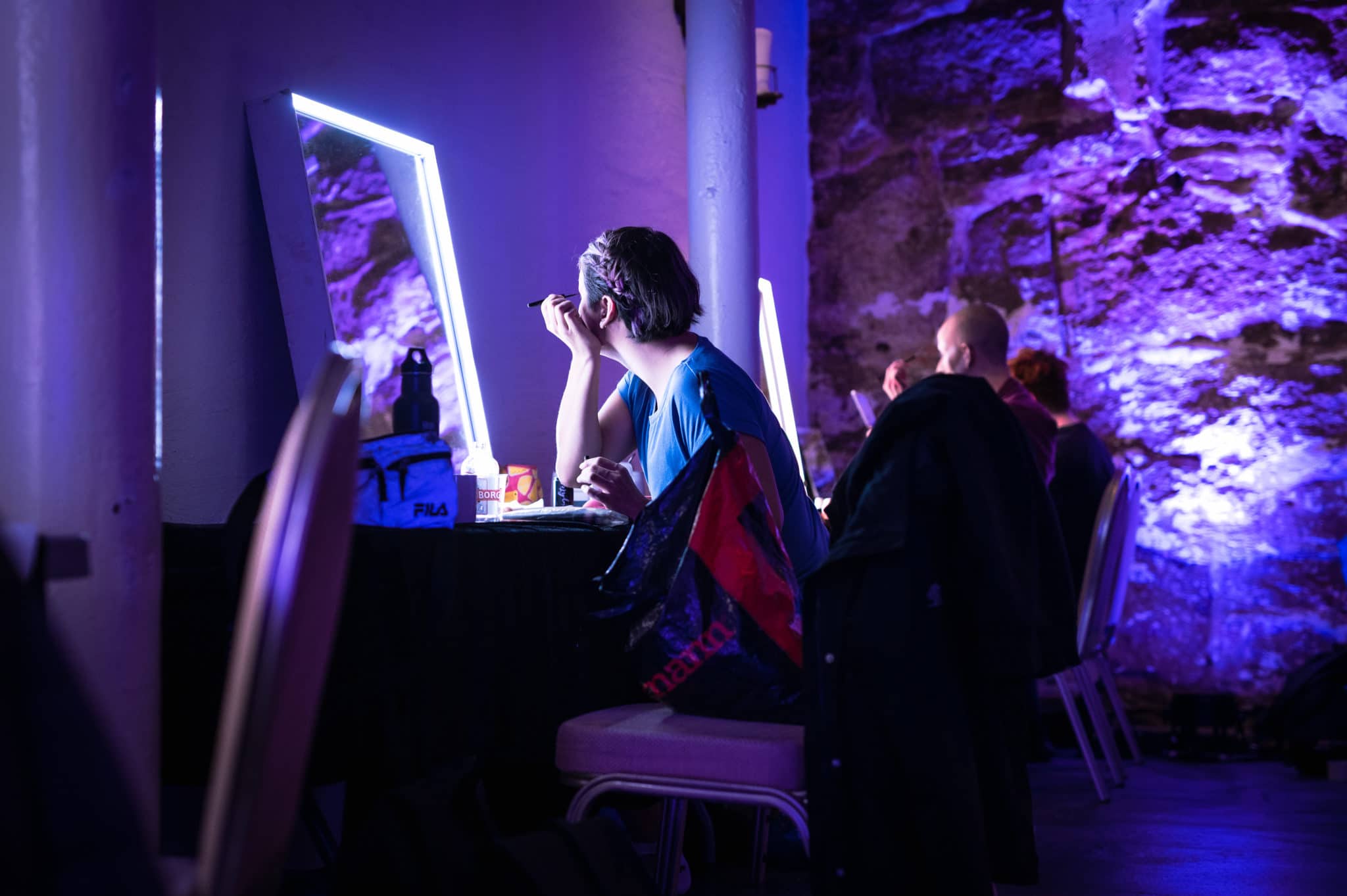 THIS LILLE LØRDAG – Postcards from Planning a Party

ʻThe party, as a refuge, is a place to catch oneʼs breath when you canʼt breathe. It is a way of staying alive and of keeping each other alive.ʼ

An introduction to this writer – host and guest

Hello, Iʼm Luke Pell (@lukepellmakes) Iʼm long, queer and a little bit furry. A neurodivergent, white person whose pronouns are they/them or he/him. Iʼm dyspraxic, I also have  dyscalculia; dysgraphia; and ADHD. This manifests in my work in the ways that it seeks to draw together seemingly  unrelated constellations of bodies and thought and in a  preoccupation with paying attention to plurality; of people and  of place; of perspectives, perception; and form.

Iʼm a maker, curator and dramaturg. Woven throughout my  way of working are practices of hospitality and care; advocating for alterity; attempting to attend with equanimity.

Learnt whilst working in shoe shops, pet shops, plant nurseries and hair-salons; in pubs, clubs and community centres; in café  bars and theatres. Through volunteering and organising; being  part of collectives, campaigns, protest and quiet activism. And,

from twenty-five or so years of collaborating, to make performance happen in different ways ‒ with artists, dancers; dance companies and houses; in libraries, galleries, museums; nightspots, festivals; clifftops, coastlines, public parks and  gardens. At heart, I would say Iʼm a quiet creature in a loud  blouse, a poet – engaged in choreographic thinking – who  enjoys creating intimate encounters that celebrate difference – in the everyday ‒ nuance; pride and feeling.

What follows are a series of notes: rememberings, reflections,  gleanings ‒ postcards, from being invited as a guest curator  for the opening party of CODA Dance Festival 2021 in  collaboration with queer peers Anne-Line Kirsten and Ulf  Nilseng. An invitation that I was delighted to RSVP to with a  yes, yes, yes, yes! 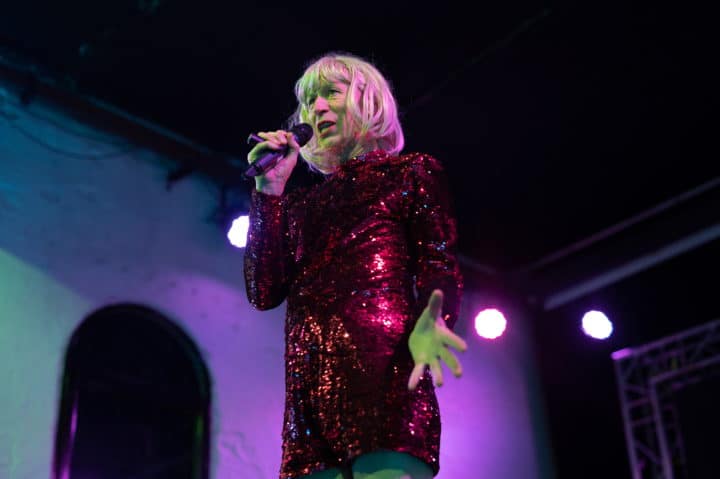 Weʼre here, weʼre queer and sharing what we have in common

ʻBody mind-acceptance can wake us up in the morning, put us  to bed at night, visit us as weʼre dressing to go out or singing  along to our favourite song. These moments donʼt usually  arrive as big and brash as a Pride parade. Rather they appear  unexpectedly as weʼre rabble-rousing in the streets, tromping  through the woods, or dancing up a storm on Friday night.  These moments let us turn away from normal. They interrupt  the many ways shame hooks us into cure. They create space  for our body-minds as they are right now.ʼ

When we first came together – over Zoom – to begin to dream  a party, it was the very beginning of the Pandemic. We were all  in our respective flats, three people of different generations,  identities, origins, geographies; D/deaf; neurodivergent, non binary; gay. What we had in common was being queer and  dance. What we had in common was a resistance to some of  the narratives unfolding around the pandemic – that something  like this hadnʼt happened before.

For those of us who lived in, through and/or remember the  HIV/AID crisis of the 1980ʼs this wasnʼt the first  unprecedented pandemic weʼd known.

What we had in common was our alignment with the Black  Lives Matter Protests of that year, knowing we will never know what it is to live as a Black person or person of colour in this  world, but having absolute lived understanding of the need to  protest, to be visible, valued, noticed. What we had in common  was a belief in the importance of what it is to be in coalition; to  take up and make space; to step aside; amplify and lift other  voices and one anotherʼs too. 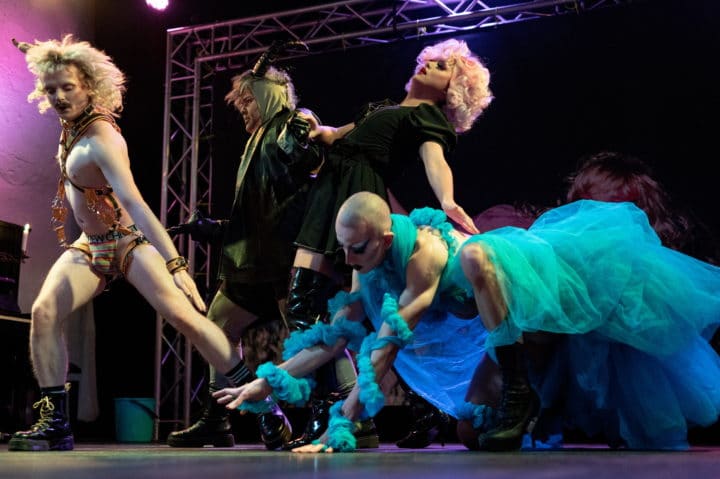 On the edges: our families, histories, communities, heritage

ʻTo be queer was never respectable […] Pushed to the fringes,  our world existed in the twilight of Heterosoc…ʼ

Many of us whose family structures are ʻunconventionalʼ ‒ fluid, found and made, had found ourselves isolated and  fragmented. Unable to gather in the pubs, underground clubs,  cafes or community centres where we might usually meet; we  couldnʼt go out ʻon the roadʼ with shows; or even cross the  street (or ocean) to be with our friends, elders, siblings, lovers.

These separations prompted conversations about how and  where we have and do come together. About queer and crip  joy. The importance of noticing those moments where you can  shake off shame and savour pleasure. The history of pride and  protest and those times, places, parties where we had felt  welcomed; seen, heard, held and, safe. The urgency of that need.

ʻStonewall was a RIOT […] The riot sparked a revolution in  our consciousness. A community of interest was established  and a debate was entered. The harder it was fought the more  our case was furthered.ʼ

We talked about such super queeroes ‒ our shared LGBTQ+  heroes and references across, time and space and whatʼs  changed across the decades. We talked about ʻbeing outʼ at  what age, when and where, with whom. What felt safe and  comfortable because of local/global context.

We talked about discomfort and tension and our memories,  past and present, of fractures and division within our own  community. Changes in language, terms and acronyms; who  what is for, who should do what work; pain, labour, privilege,  and the differences between, information, education and  activation.

We talked about the difference between knowledge and  acknowledgment; being alongside, learning from one another;  from those whose bones have built our dreams; from those we  donʼt yet know and what it would be like if we could invite that  breadth of lived experience to come along and be made  welcome. 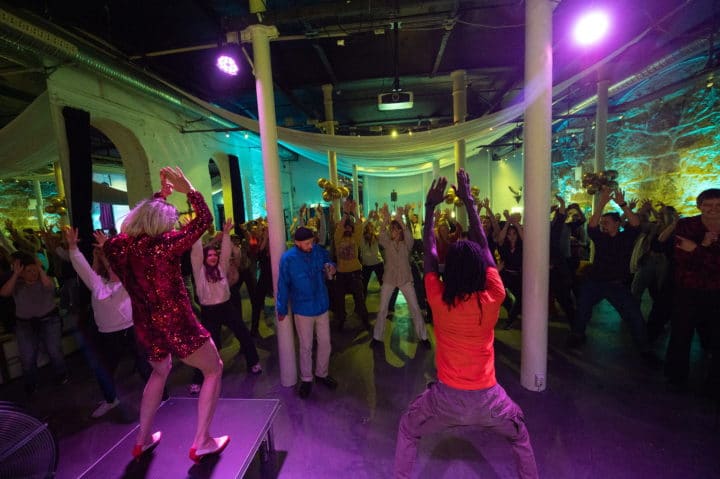 Lie down with me and touch

ʻI learn my most lasting lessons about difference by closely  attending the ways in which the differences inside me lie down  together.ʼ

Enmeshed in these conversations about our interruptions and inspirations were functional fundamentals, thinking about pragmatics, ease and access: When and where we did go out and how easy (or not) that was. We talked about how  historically queer parties have happened in spaces on the  edges, underground and fringe, in lofts, apartments, warehouses that are often inaccessible – out of hours and out  of town.

We talked about the kinds of conditions that mattered to us:  accessible spaces, good free/affordable transport; the sorts of  things that get weighed up when deciding to venture out. Like  demands on energy; do I have enough spoonʼs; whatʼs my  capacity; my sense of safety – will there be folk like me, even if  Iʼm on my own.

And once weʼre there: what makes a good party; is there  choice, where is there parity.

We chose to search for somewhere central and accessible, with  lots of space, light and rooms. With areas where people could  drink and dance and revel, and areas where they could rest, be  quieter, sign, slowdown.

We talked about ʻA Little Saturday ‒ Lille Lordagʼ and  following that Norwegian tradition of taking a moment  together to get over the ʻmid-week hump.ʼ How some playful (and thoughtful) relief away from the busy-ness of the  weekend, might be a little less overwhelming, in this moment in time and make it more possible for different folks to come.

We talked about wanting to offer different qualities, energies and textures of encounter throughout the night. From early  evening until later – a potluck party with something, hopefully, for everyone. 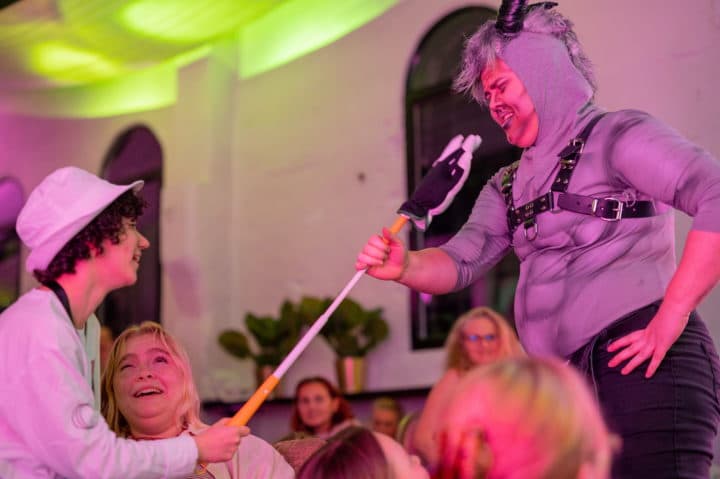 On care – for the space between

ʻPerformance work that addresses itself to the care and  support of other people enacts a form of resistance to the  ʻcarelessnessʼ of contemporary life.ʼ

Curate, in English, comes from the medieval Latin Curatus  ʻone responsible for the care of soulsʼ connecting to the Latin  ʻcuraʼ ‒ care. I remember a colleague of mine, who curates  fashion exhibitions, telling me itʼs important to give as much  attention to the space between objects in a curation, as you do to the objects themselves. This care for ʻthe space betweenʼ has always struck me as one of things we train to attune to  when making dances. These sorts of skills may be subtle, even  invisible, but feel like such necessary acts of resistance in the contemporary world. Especially in this now and next: how do we give due attention to the care of souls and to the space  between them.

This sense of space and flow were key considerations in our  mapping and arranging of the evening – the choreography of  care in a social space.

We spoke with one another about the shape of the evening,  who might come, how people might enter, be welcomed, sit  and sip, take a break, watch, participate or perch, learn, lean in  and join a dancing swell, as much as we did about the  wonderful artists that we invited to make offerings, share their  works, their vision, values, selves.

ʻQueer cultural workers are able to detect an opening and  indeterminacy in what for many people is a locked-down dead  commodity […] hope can be disappointed. But such  disappointment needs to be risked if certain impasses are to be  resisted. A certain affective reanimation needs to transpire if a  disabling political pessimism is to be displaced.ʼ 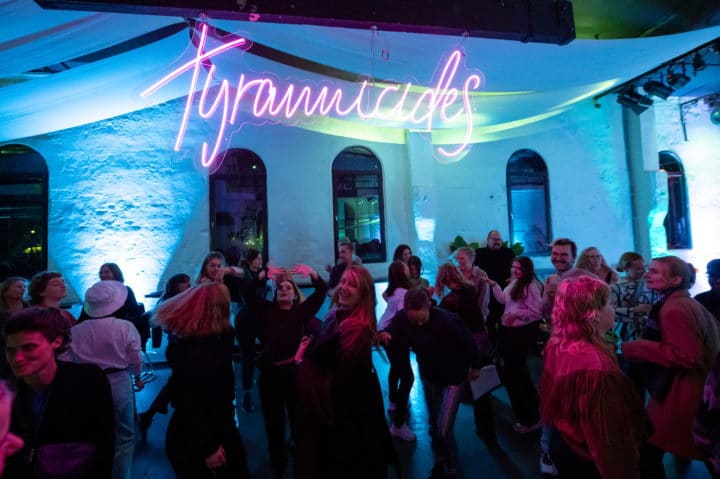 A portal on to sustenance and pleasure

ʻLike a performance, a party can appear in the blink of an eye.  Itʼs a way of bringing people together and mobilizing them.  Both performance and parties can be pleasurable,  and they can produce worlds that sustain people  as they survive hostile living conditions.ʼ

Along the way we came up against challenges: what it is to try  pursuing a shared vision when you are a temporal group of  collaborators; not yet able to share physical space; with no  prior in person history. For most of us it was one of our first attempts in realising a live event in a Covid-complicated,  locked down world. Grappling with slightly more strained communications, protocols with safety, illness and the  impossibilities of travel. We took all of this in along the way,  took some time to pause, reflect, reorientate, and question.

We took those necessary, sometimes tedious, and frustrating, questions as openings:

Knowing we know how to organise, how to make stuff happen  in the face of adversity, to work with what weʼve got and  recognise opportunity… this opportunity:

at this moment in this shared space.

With, one another; our friends, peers & allies.

joining together in celebration & solidarity,

was, a portal onto a party &

the opening of a festival

for, intersectional uplift, the growth of new networks, alliances  & connections & in that now, this next,

so much needed sustenance & pleasure.

Muñoz, José Esteban. Cruising Utopia – The Then and There  of Queer Futurity. New York University Press, 2009